Is Artificial Intelligence The New Logistics Technology For Organ Transportation? 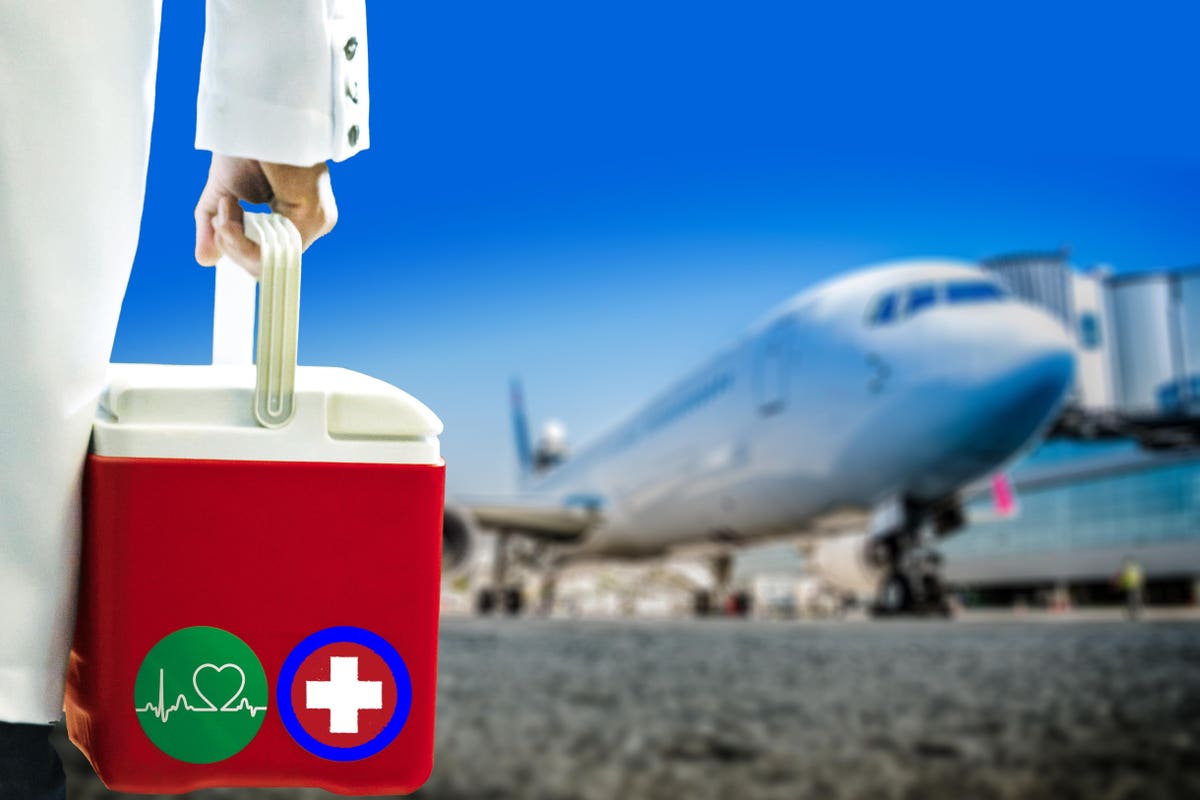 In the United States, an estimated 114,000 people were waiting for organ transplants, and only 30% of those got their organs on time in 2019. According to Kaiser Health News and Reveal from the Center of Investigative Reporting, nearly 170 organs could not be transplanted. Almost 370 endured near misses with delays of two hours or more because of transportation problems.

According to the American Transplant Foundation, 20 people die each day because they do not receive their lifesaving organs in time, making the number of annual deaths greater than 40,000.

Patti Niles is CEO of Southwest Transplant Alliance, a non-profit organ procurement organization. Niles says that geography is always their most significant issue when it comes to transporting organs.

“The distance that organs can travel before they are transplanted varies by organ-based on how long they can stay outside of the body and successfully be transplanted,” said Niles. “Either in a temperature-controlled environment or on a perfusion pump that artificially simulates body functioning for the organ, that time can vary from several hours to up to 2 days.”

Niles says that because organs travel via charter plane, commercial flight, or courier more frequently than ever before, that has resulted in increased risk in the transportation of organs.

“Because our organization is committed to saving lives and providing healthy organs for transplant, we are looking to innovate through any transportation challenges that might be a barrier to fulfilling our mission,” added Niles.

“We have also sought out technology partners that have devices to regulate the temperature of the organ or artificially pump the organ so that the amount of time it can be outside of the body is longer,” said Niles. “This gives us more time for transportation.”

Niles adds that the Alliance has seen recent improvements through GPS technology that provides tracking and alerts if there are disruptions along the transportation route.

Reg Seeto, CEO and President of CareDx, a health tech company dedicated to transplant patient care, says that with more than 100,000 people on the transplant waitlist, it’s critical to ensure organs get to their intended recipients.

“This will expand the supply to increase the number of people who receive a life-saving transplant,” adds Seeto. “Organ procurement organizations need tools to track their quality metrics better and follow up on issues in their process. There is a real opportunity to support peri-transplant with technology that can keep the organs viable longer and improve outcomes.”

“However, there are still significant logistical hurdles to rapid and reliable organ delivery, particularly in urban environments and high-traffic areas where delivery times can be delayed,” said Henderson.

In April 2019, the University of Maryland Unmanned Aircraft Systems Test Site conducted the first drone delivery of a live organ for transplant into a waiting patient, a 44-year-old former Veterans Administration nurse in her eighth year of dialysis. Silvus partnered with the Test Site to provide tactical wireless communications, including audio and video, for the entirety of transport with their Silvus StreamCaster radios.

“This technology can provide communications even in cluttered urban environments to ensure quick and reliable delivery,” added Henderson. “A more timely, on-demand, automated organ distribution and transportation system will be much more efficient than a manual system, which is reliant on other air assets and resource scheduling system.”

In April 2021, the Southwest Transplant Alliance organization transplanted a set of lungs that were on a perfusion pump by TransMedics for 27 hours. This technology, coupled with optimized transportation routes has the potential to extend the window organ transportation.

Barry Alexander, Founder and CEO of Aquiline Drones Corporation, says that when every second counts, unmanned aerial vehicles (UAVs) [..] propose an ideal solution to move an organ quickly to where it needs to be safely, securely and medically sound.

“There is a significant amount of waste due to transportation inefficiencies, and to mitigate this situation, automation is needed,” said Alexander. “Automation of a complex, ever-changing logistical footprint is facilitated by the use of a deep learning AI.”

“In 2019, we began creating a life-saving medical delivery service for human organs and tissues using drones,” said Alexander. “Today, we are augmenting these life-critical drone deliveries with a cognitive digital agent called Sparticus to [..] help solve the transportation logistics conundrum that’s responsible for the yearly 25% loss in viable organs.”

“The idea is that manned aircraft and UAVs will work together to deliver organs and other critical cargo with some level of ground transportation involved,” said Alexander. “Although our drones can do direct pickups and drop-offs to and from hospitals if the FAA allocates space for this service, our established frameworks create the scheduling, dispatching and flight execution.”

Alexander says this is where AI becomes invaluable.

“Spartacus is tied into real-time data sources including the FAA, weather, traffic and other related data sources to leverage its learning capabilities for optimized transportation options,” said Alexander. “From those datasets, it selects the best way forward using customer specifics, such as time of arrival, geo-location and cost.”

Alexander adds that the system also provides optimized recommendations even during the mission to correspond with changing conditions.

“As Sparticus gets smarter over time and data is built up in its historical and temporal layers, the AI improves its efficiency,” said Alexander. “Once properly trained, Spartacus will achieve high rates of mission completion success for each organ transportation and delivery.

In other words, says Alexander, manned aircraft, drones and ground transportation will all be guided by AI during the scheduling and dispatching stages to deliver organs more efficiently.

According to a spokesperson from DP World, which ships 10% of the world’s trade, the logistics industry has been hampered for decades by inefficient technology and outdated operating systems. “Until recently, organizations also couldn’t see where in the world their goods were once they had left the warehouse, meaning it was virtually impossible to act quickly or nimbly to changing circumstances.”

“As the demand for global goods continues to increase, these outdated ways of working need to change, and as a business, it’s our priority to help the industry transform,” said DP World through a spokesperson. “Data and AI will play an increasingly important role in our future, and we recognize it as a real gamechanger for the industry.”

“Most of these start at an arbitrary place—a lab, hospital, warehouse—versus an airport. And, then there are numerous options to take the package to its final destination; in fact, there are more than 180 million ways to go just from San Francisco to Boston,” said Rusnak.

“In addition to choosing the best route, factors like traffic, weather, the driver’s knowledge of the route and real-time incidents also need to be considered as events unfold, making it a highly complex and ever-evolving equation,” adds Rusnak.

Rusnak says you only have to look at the possibilities of a time-critical shipment traveling from Boston to San Francisco. “With more than 180 million transport options to see how complicated it is without AI.”

For context, Rusnak says it takes a computer more than four hours just to count to a trillion. “Even traditional computer programs with conditional logic or graph transversal cannot solve the problem,” said Rusnak.

According to Rusnak, different types of commodities have different profiles for an optimal route. In the case of a living organ, Rusnak says that AI looks for all of the fastest paths and uses a neural net to score them.

“Based on all possible ways to ship an organ [..] AI considers the confidence level of particular routes, and can also do this for situations that it hasn’t seen before in less than a second,” said Runak. “It can also get even smarter over time by observing and analyzing vast amounts of data it encounters.”

“For instance, an organ requires a route that is as fast as possible with minimal risk, while cryogenic tissue requires minimal cost with no later than same-day delivery,” said Rusnak. “The first would prefer something like driving farther to a different airport to make an earlier flight while the second would minimize ground transportation while still making a same-day cutoff.”

According to Niles, whose organization works with Airspace and other technology partners, the ability to re-route in real-time helps fulfill their lifesaving mission.

Niles says that over the last three years, they have shipped close to 1,000 kidneys using perfusion technology, including real-time GPS tracking.

“If there is a transportation delay, that notification will help our team also notify the transplant center, and they can adjust based on that real-time information,” said Niles. “The system we use also looks to optimize the transportation route and provide a new delivery time based on the delay.”

“Overall, the use of AI in life-critical transport will transform the entire industry,” said Alexander.